The forum for general banter about the team.

"Hi all
The Forum Flyers have chosen the Crazy Eights - Triple Crown as the August challenge. Row 3 intervals of 888 metres each with 80 seconds of rest between the intervals. Record the total time for the 2664 metres (excluding the rest time). First interval should be off a standing start, but second and third intervals can be standing or rolling starts.
Cheers
Dave"

Looks like I'm going to be doing lots of sprinty stuff next month then, given I am also looking to get some Nonathlon points on the Board and the main gaps are at the short end. Oh good.
55 years old, 5"10', clinging on to 75kg and frustratingly but understandably inconsistent

Never before has the power of two words been so great!

Had my "go" at this last night. I have to say, it's on the borderline between awful and horrible, mostly because the recovery/rest of 80s wasn't enough for me. In fact, I only looked up after the first one with 12s left before the second rep was due to start and I was far from ready.

I had almost the same experience - looked up and only had a few seconds until the 5 second rolling start, and definitely wasn't "ready"! I think I could go a bit faster on mine, I did the first rep fairly slowly -- but not sure how sustainable the faster pace would be across the three reps -- my pacing was 2:09, 1:47, 1:49 -- so that sub-1:50 might be too hard for all three given the decay from rep 2 to 3.

How are people finding this compared to 2K pace?

I haven’t decided whether to actually do this yet, I’m so fed up about the ridiculous decision on slides.

Jon
55 years old, 5"10', clinging on to 75kg and frustratingly but understandably inconsistent

I have some thin experience on the 2k as you guys know.. but it seems pretty similar. I had to work hard to get 1:50 avg pace on the 2k, and it feels like going from my current CTC 1:55 to 1:50 would also be the same level of hard (ie: just barely within my abilities).

I haven’t decided whether to actually do this yet, I’m so fed up about the ridiculous decision on slides.

Sent from my CPH2173 using Tapatalk

Sent from my CPH2173 using Tapatalk

Well, I wasn’t sure what to do.
First I was annoyed with the CTC to exclude slides, then last month it didn’t fit my training plan, but as I got green light from the coach on fitting it in at SR28 I had a go at it today. Was pleasantly surprised to see where I ended up. Only a little annoyed that I didn’t check the current scores, as first spot might have been possible

Anyway, that was it from my side for this month. Hopefully the future CTCs will again fit my training schemes. 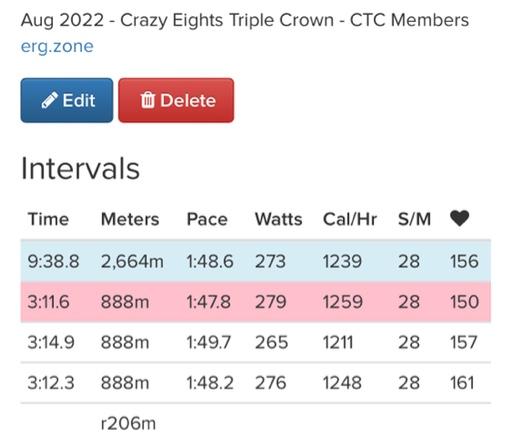 Thanks! Funny you say that, as I told the coach that I was frustrated as I couldn’t get it to be consistent as I had no pace target. He said R28 and 1:54 or faster. I went off a bit too fast, but probably could have gone for 1:48. Anyway, won’t have a second go.

Now we need some scores from the ladies to float the boats!!

I talked to Ingrid and Gaby, hopefully they will give it a go tonight or over the weekend (as will I).

I had about 5K meters left to do for my weekly Dog Days target, so I decided to pop this CTC in there as part of it. After a 1K warmup, I was pleasantly surprised to surpass my 1:55 goal pace. Pretty consistent, though that third effort felt a lot harder than the other 2...

Also interesting to see my SPM at a steady 30 as I paid no attention to that at all. I won't be putting in another effort for this one...

After about six weeks off the erg I had my first go last friday. I hoped for a pace around 1:50, this is how it went:

First rep went well and I managed to finish under 1:50 pace. I totally screwed the start of the second rep (pace after two strokes at 3:40

), but managed to pull it back to 1:50ish. Third rep was the quickest one, but only just, I was too exhausted from the second rep.

Having lost some time in the rep 2 I thought "why not go again and do better, I should find a second or two", so I went again the following day:

This one went much better, I had learned from my previous attempt and was even able to pip Takko by 0.3 seconds (before you ask: we‘re still friends)

Grobi wrote: This one went much better, I had learned from my previous attempt and was even able to pip Takko by 0.3 seconds (before you ask: we‘re still friends)


Sent from my iPhone using Tapatalk

Some great attempts on here so far this month

I broke clean sheet this month and managed to catch covid for the first time. No major illness (not much more than a mild cold for a few days), but almost 2 weeks without exercise while I isolated. So, I'll build back up over the next week and hopefully be in reasonable shape to give this one a shot by the end of the month

51, 6'2" and trying to get back to 90kg post hip replacement. Looking back fondly on past achievements I've no chance of repeating
Top

(still having a clean sheet, should have been contested at stage one in TdF in Copenhagen... During the TT practically the only way out of the Town Square was by the Metro, which naturally was crowded with people...)