Tired of talking about rowing and want to talk about the real world? Enter a forum where rowing is a rude word...

The heat from the fire was comforting as the three electric bars glowed
brightly in their metal cage. Nora peeked across the room over the rim of
her Reader's Digest.

Gerald was snoring lightly, with his half-moon spectacles balanced on the
end of his nose, a thin ribbon of drool sliding down his chin onto the edge
of his striped pyjamas.

His half-read newspaper had fallen to the floor, and the cat had curled up
on top of the unfinished cricket scores.

She closed her book, turning over the corner of the page she had been
reading so as not to lose the article on herbaceous borders, and placed it
down next to her half-drunk Horlicks.

Nora slid out of her chair, and grabbed the armrest. Carefully kicking off
her sheepskin slippers and, sliding her wheeled table out of the way, she
hitched up her velvet dressing gown and padded towards him.

She slid her hand under his pyjama top, rubbing his arm gently. He smacked
his lips together, as though he could taste the cod in parsley sauce they
had for supper.

His eyes flickered open and he squinted at the light and the looming shadow
in front of him. Gerald could see she wanted him to follow her.
He took off his glasses and placed them on the coffee table as he rose out
of his chair, his knees and back cracking as he straightened up.
She reached forward and grabbed the long-shaft of his walking stick, gnarled
and rough, and placed it in his hand.

Nora began to negotiate the stairs, gripping the banister, the light from
the landing highlighting grey roots in her blue rinse. Gerald could hardly
wait to get to bed; he settled onto the green padded cushion of his Stannah
stair lift and flicked the button, slowly ascending towards her waddling
behind as she stumbled up the last two steps.

Nora padded into the bathroom as Gerald sank down on the edge of the double
divan. She returned after a few moments, passing Gerald a cold and cloudy
glass of tap water into which he dropped his teeth with a quiet splash. She
placed her own glass onto the bedside table and removed her top denture,
dropping it into the glass and adding the cleaning tablet with a plop and a
fizz..

Gerald had already slid under the 15-tog duvet and was smoothing out the
wrinkles on his V-pillow. Nora slipped her shoulders out of her gown and
placed it next to the commode, then slid under the paisley polyester, her
hand brushing Gerald's as she fumbled for the TV remote.

Gerald gripped the handrail as he slid open the drawer under the dimly lit
touch lamp and pulled out a blister pack of Viagra, his face falling as he
realised it was empty. He could've sworn there were a couple left.

Nora smiled to herself as she pressed the remote and the TV flickered into
life on the opening credits of Question Time. She sank back into the memory
foam pillow and her eyes glinted happily knowing that Gerald would not be
able to get another doctor's appointment until late next week and that the
little blue pills dissolving in the U-bend of the toilet would be completely
gone by the morning.
57 yrs old, 74kg, 5' 10"
40Mm metres rowed - just pootling along now

1."I've decided to sell my Hoover... well, it was just collecting dust" - Tim Vine.
2."I've written a joke about a fat badger, but I couldn't fit it into my set" - Masai Graham.
3."Always leave them wanting more, my uncle used to say to me. Which is why he lost his job in disaster relief" - Mark Watson.
4."I was given some Sudoku toilet paper. It didn't work. You could only fill it in with number ones and number twos" - Bec Hill.
5."I wanted to do a show about feminism. But my husband wouldn't let me" - Ria Lina.
6."Money can't buy you happiness? Well, check this out, I bought myself a Happy Meal" - Paul F Taylor.
7."Scotland had oil, but it's running out thanks to all that deep frying" - Scott Capurro.
8."I've been married for 10 years, I haven't made a decision for seven" - Jason Cook.
9."This show is about perception and perspective. But it depends how you look at it" - Felicity Ward.
JonathanA | more pedalling than pulling at the moment
Top

1.Rob Auton - "I heard a rumour that Cadbury is bringing out an oriental chocolate bar. Could be a Chinese Wispa."
2.Alex Horne - "I used to work in a shoe-recycling shop. It was sole-destroying."
3.Alfie Moore - "I'm in a same-sex marriage... the sex is always the same."
4.Tim Vine - "My friend told me he was going to a fancy dress party as an Italian island. I said to him 'Don't be Sicily'."
5.Gary Delaney - "I can give you the cause of anaphylactic shock in a nutshell."
6.Phil Wang - "The Pope is a lot like Doctor Who. He never dies, just keeps being replaced by white men."
7.Marcus Brigstocke - "You know you are fat when you hug a child and it gets lost."
8.Liam Williams - "The universe implodes. No matter."
9.Bobby Mair - "I was adopted at birth and have never met my mum. That makes it very difficult to enjoy any lapdance."
10.Chris Coltrane - "The good thing about lending someone your time machine is that you basically get it back immediately."
JonathanA | more pedalling than pulling at the moment
Top

Someone send me an email with a load of jokes today and this one amused me, so I thought I'd share it.

It's been a couple of months since anyone posted here. I saw this one today and it struck a chord.

Last night, my kids and I were sitting in the living room and I said to them "I never want to live in a vegetative state, dependent on some machine and fluids from a bottle. If that ever happens, just pull the plug."

Not so much a joke, more a comment on modern life:

A man sees a sign outside a house - 'Talking Dog For Sale.' He rings the bell, the owner appears and tells him the dog can be viewed in the back garden.
The man... sees a very nice looking Labrador Retriever sitting there.
"Do you really talk?" he asks the dog.
"Yes," the Labrador replies.
After recovering from the shock of hearing the dog talk, he man asks, "So, tell me your story."
The Labrador looks up and says, "Well, I discovered that I could talk when I was pretty young. I wanted to help the government, so I told the SAS.
"In no time at all they had me jetting from country to country, sitting in rooms with spies and world leaders, because no one imagined that a dog would be eavesdropping.
"I was one of their most valuable spies for eight years.
But the jetting around really tired me out, and I knew I wasn't getting any younger so I decided to settle down. I signed up for a job at Heathrow to do some undercover security work, wandering near suspicious characters and listening in. I uncovered some incredible dealings and was awarded several medals. I got married, had a few puppies, and now I've just retired."
The man is amazed. He goes back into the house and asks the owner how much he wants for the dog.
"Ten quid," the owner says.
"£10!!? But this dog is absolutely amazing! Why on earth are you selling him so cheaply?"
"Because he's a lying bastard. He's never been out of the garden!!.

Everybody has a plan until they get a punch in the face.

Thanks for that. For once I can use 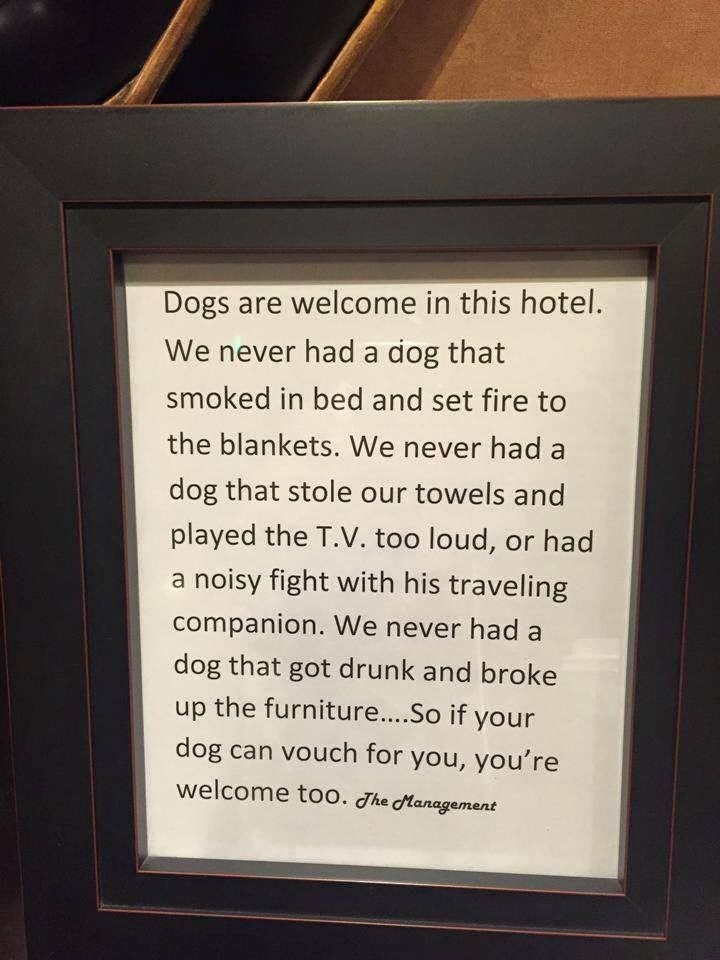 They had a similar (or was it the same?) sign in the Normanhurst Hotel in Sale where I stayed for last year's Madchester.

Two 90 year old men, Mike and Joe, have been friends all of their lives.
When it's clear that Joe is dying, Mike visits him every day.
One day Mike says, "Joe, we both loved rugby all our lives, and we played rugby on Saturdays together for so many years. Please do me one favour, when you get to Heaven, somehow you must let me know if there's rugby there."
Joe looks up at Mike from his death bed, "Mike, you've been my best friend for many years. If it's at all possible, I'll do this favour for you."
Shortly after that, Joe passes on.
At midnight a couple of nights later, Mike is awakened from a sound sleep by a blinding flash of white light and a voice calling out to him, "Mike -- Mike."
"Who is it?" asks Mike sitting up suddenly. "Who is it?"
"Mike--it's me, Joe."
"You're not Joe. Joe just died."
"I'm telling you, it's me, Joe," insists the voice."
"Joe! Where are you?"
"In heaven," replies Joe. "I have some really good news and a little bad news."
"Tell me the good news first," says Mike.
"The good news," Joe says, "is that there IS rugby in heaven. Better yet, all of our old friends who died before us are here, too. Better even than that, we're all young again. Better still, it's always spring time and it never rains or snows. And, best of all, we can play rugby all we want, and we never get tired."
"That's fantastic," says Mike. "It's beyond my wildest dreams!
So what's the bad news?"
"You're in the team for this Saturday."
57 yrs old, 74kg, 5' 10"
40Mm metres rowed - just pootling along now

A suspicious looking man is stopped at border control while driving a motorbike with a bag on the back.
The customs official at the border crossing asks the man to produce his identification, which he does, and it all checks out fine. He then 'asks what's in the bag?'
The man on the bike replies 'sand'. Lo and behold, when the bag is checked, it just contains sand.

Having remembered the odd case of the man on a motorbike with a bag of sand, the guy at customs recognises the same suspicious man coming to the same border crossing twice a month for 6 months, always with a bag of sand, and always with the right identification.
After those 6 months, curiousity gets the better of the customs official, and the next time he sees the man on the bike he stops him for a chat.

'Listen mate', he says. 'You've been coming here every 2 weeks for 6 months, always with a bag of sand that checks out. I can never find anything on you, but I'm convinced you are smuggling something across the border. If you tell me how you are getting away with it, I promise I won't arrest you, I'm just curious'.

The man gives him a long stare, but eventually says slowly 'Are you sure you won't arrest me?'. The custom official swears to God that he will not tell a soul, and it's only to stop him wondering about it.

'Fine' the man says. 'I have been smuggling something over the border'.

'What is it?!' cries the customs official.

Return to “The Sanctuary”