The forum for general banter about the team.

Like previous years, on the 14th of February there will be a special one-day CTC in memory of Carole McNally.
It's usually a straight 1402 m row. Seeing as it's 10 years since she died now, I can imagine it will be something different this year.

If you'd like to read more on the lady in question and why the CTC dedicates a yearly memorial row to her:
https://indoorsportservices.co.uk/motiv ... le_mcnally

Don't forget! Here's to a bright light that keeps shining, 10 years on.

Thanks for the reminder!!
Rowing for fitness & health!
Without others and competition I wouldn't, so thanks to all of you in the community for keeping me going!

Tako wrote:Thanks for the reminder!!


Yep - it would have slipped my mind

Just set up a RowPro session for 19:00GMT for it. Hope others can and will join!
Rowing for fitness & health!
Without others and competition I wouldn't, so thanks to all of you in the community for keeping me going!

1402m Tried to make it an honest effort 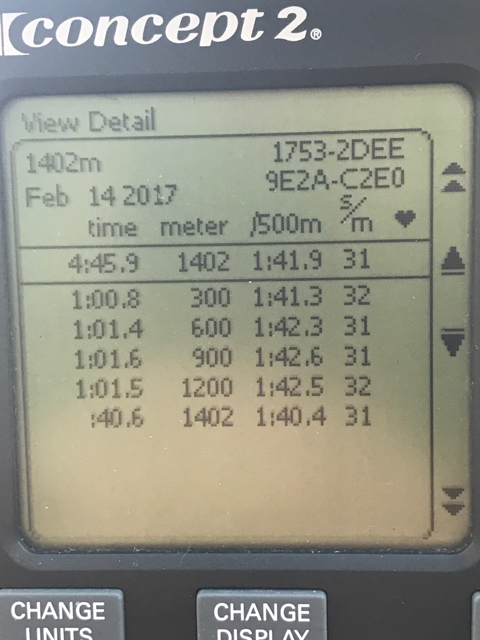 Used this as an idea if where I stand 2k wise. Felt pretty good but would definitely have to back off a second to survive. 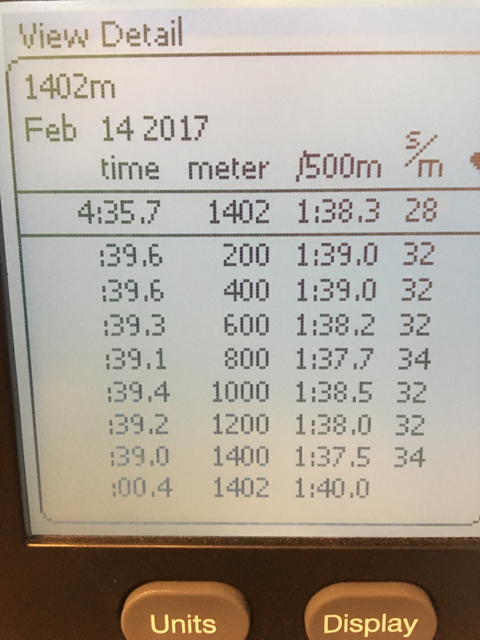 There you go, family Victory (the Victories?). Plus Alan.

I often miss this, but glad to get it in today (as my wife's birthday I should never forget

)
Did it as a warm up at the local gym, as my erg is now in store following a house move

Apologies, I would have taken part in this special CTC today but when I was queueing at the checkout this morning, the very elderly lady in front of me, put her mobility scooter into reverse, instead of forward and cannoned into me.

I have nothing against the use of mobility scooters, they are an independent means of getting around for many people, which is great. I just wish there was some control over who is allowed to use them.

Well done to all who have been able to enter a time so far.

Did not make my own RowPro session for this due to the kids (bad excuse), but the anger helped. First warm up 1402m and then first (and as it seems) last attempt where I for a while thought I could make a fitting 1:40.2 pace but ended after almost HDing on 1:40.6 which I am pretty happy with

Rowing for fitness & health!
Without others and competition I wouldn't, so thanks to all of you in the community for keeping me going!

But I also talked my wife (Mrs Mutant, aka Teri) into giving it a shot.

This was her first time ever on a rowing machine!

She told me to shut up with the lesson already and just let her row, and if I wanted to make suggestions I could, but I wasn't doing any good talking about it!

She actually said it was fun!

(She's kinda sad we're not going to Madchester this year.)

I broached the subject by mentioning to Teri that it was Feb 14th. That got me a big smile. But when I started going on about some woman named Carole McNally, the smile turned to suspicion. I quickly interrupted myself and explained that Carole has been dead for 10 years (the suspicion turned to doubt)... We finally got it all straightened out, but it sounds like we might be going out to dinner later.

Too bad with your "accident", Jill, hope you are both all right

Great to see so many full boats (half of them) in this challenge are Free Spirited! =D> About a third of all individual entries were Free Spirits (32%).
And if not for mobility scooters we would have had 5 boats floating.

Welcome to Teri! Doing an indoor rowing challenge surely is an unusual Valentine's gift for a wife to give her husband.

Special kudos to Barbara for getting her time up there even after the administrator of the CTC website had rolled back the challenge to the February one, hours before the 14th was done in the USA. I suggest that next year, our American members are allowed to row this challenge on the 13th.
Having said that, looking at the overall participation this year, I have to wonder if there will be a next year for this particular row. Where are the big teams on occasions like these?
M | 48 | 1.78 m | 76 kg

I rowed this really slowly as my cooling down. The training schedule gave me no other choice. But I did participate!

sander wrote:I rowed this really slowly as my cooling down. The training schedule gave me no other choice. But I did participate!

I wondered what happened when I saw your time!

A special thanks to the lovely Jennifer!

Barbara - who did you have to threaten to open the board back up just for you?

Hi Tako, good idea to make a row pro row...wish i could have participate, but i think it is a very reasonable excuse putting the children to bed...which is happening to me nearly every day so i cant be part of the genfit 1930 row...but perhaps we could open a new row pro session here ...

last year the 14th Feb. was a Sunday...is this the reason why the number of total entries decreased so much this year ?
Top

Claudius wrote:last year the 14th Feb. was a Sunday...is this the reason why the number of total entries decreased so much this year ?

First & foremost - Jill are you OK? Sorry to hear of the ... entanglement

Zoot - WOW - great to see Teri log a time! Give her a big high five!

I did the row at 5:30 pm after an 11 hour workday, and hadn't noted what is apparently a traditional time zone restriction -- for sure a tough window for me on a busy weekday. It was a bummer to find it already shut before 6pm. I created a user login on the other forum -- and asked Dougie if he'd add it, which he kindly did.

Also saw references to doing a one-day tribute row for Bob Spenger. I'm hoping they will include a bit more helpful info on timing with that one too. I won't forget the occasions I was able to see him row in Long Beach at 90, very inspirational.

Great job to all others who fit in a time. It doesn't surprise me in the least that we have strong turnout -- a bunch of really, really good hearted people here.

Oh dear... well, I have a couple weeks to figure out what that window might be for me!

(time zone math is not my forte)
-barbara